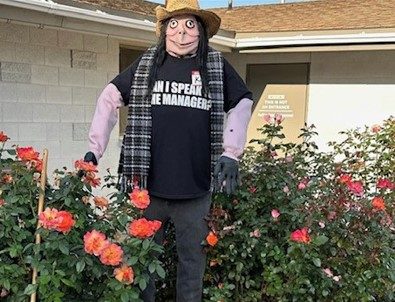 A local woman claimed that the “Karen” in the display was made in her likeness as retaliation for opposition to one of the city’s proposals.

Prosser, Washington — In an ironic twist of fate, a complaint from a “Karen” residing in Prosser lead to the city removing it’s Karen-themed Halloween display last Wednesday.

The city-sponsored Halloween display titled “Karen’s Garden,” was originally submitted to the town’s annual Halloween decoration competition. The display consisted of a scarecrow with a nametag labelled “Karen” and a shirt which said “Can I speak to the manager?”

Maricela Sanchez, told NBC Now that the scarecrow Karen was made in her likeness as retaliation for her opposition to the city’s proposed construction bond for a new city hall. Other Prosser residents complained to the city as well, stating that the display was an attack on a particular type of woman.

“City Hall entered an annual Halloween decorating contest with a ghoulish scarecrow dressed up to look like me,” Sanchez said. “Prosser City Hall engaged in targeted, public harassment of a private Prosser citizen on public grounds. They created a grotesque effigy to publicly humiliate a city resident as retaliation for opposing a city bond proposal on the upcoming ballot.”

Following Sanchez’s complaint, City Administrator Thomas Glover issued an apology. He said that although the display was “inconsistent with the spirit of the competition,” it was never meant to harass anyone in particular.

“This was in no way intended to be a political statement, a likeness to any individual or community group,” said Glover. “We have investigated the issue internally and found that no one who participated in creating the entry intended any malice. These actions were regrettable, but unintentional.”

Glover added that City Hall employees will receive sensitivity training to understand why the display was offensive.