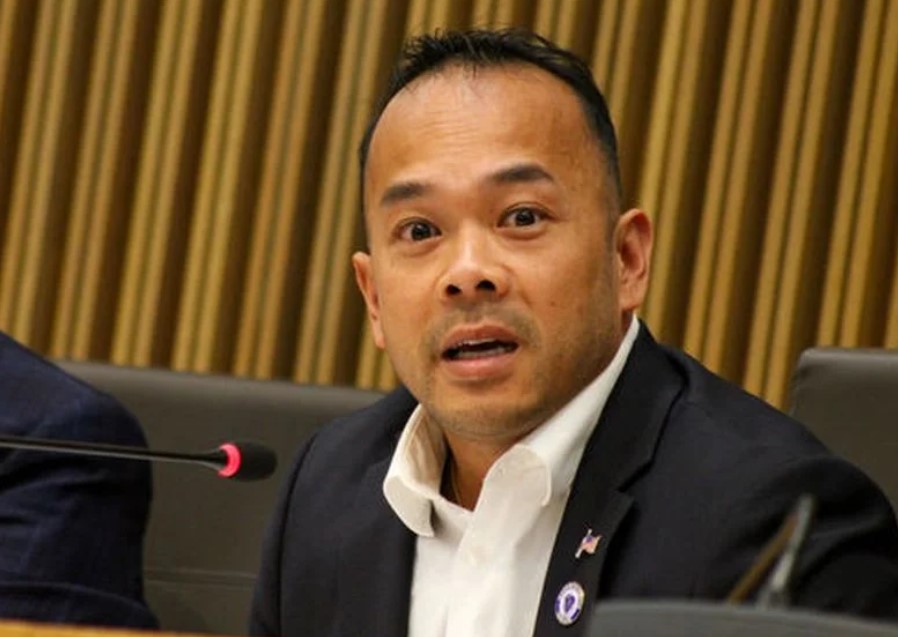 Courtesy Photo/State House News Service: In 2020, Dean Tran was also stripped of his position as assistant minority whip for using his taxpayer-funded staff at the State House to work on his campaign.

He was also charged with misleading investigators.

BOSTON — Former Republican State Senator Dean Tran, of Fitchburg, was indicted by a Worcester Grand Jury Monday for allegedly stealing a firearm from an elderly female constituent and then misleading investigators about what transpired.

“The AG’s Office alleges that, in June 2019 while visiting an elderly constituent, Tran used his position of trust as a public official to intimidate the constituent into parting with her late husband’s firearms, making her sign a pre-prepared contract and giving her $1,500 in cash for at least eight guns,” said the release from Healey’s office.

The woman then allegedly asked Tran to return the guns the next day.

“When asked to return them the next day, he did, but came back early the following morning and allegedly forced his way into the constituent’s home while she was alone, demanded the keys to her husband’s gun safe, and stole a Colt .45 while the constituent hid in her bedroom. The gun was returned to the constituent at a later date,” said the release from Healey’s Office.

When Tran was being interviewed by police, he allegedly gave multiple conflicting statements. At first he denied that there was any firearm transaction, he then eventually produced a sales contract for the weapons before allegedly disparaging the mental capacity of the elderly constituent and demanding a written apology from her.

The Attorney General’s Office also alleges that Tran – who is currently running for election to the U.S. House from the 3rd Congressional District – made false statements on his license-to-carry renewal application in May 2019.

In addition, in 2020, Tran narrowly lost his re-election bid after the State Senate Ethics Committee concluded in a report that he had assigned taxpayer-funded office staff to work on his campaign.

Following the release of the Ethics Committee’s report, Tran was removed from his position as assistant minority whip.

Tran was charged with Larceny of a Firearm (1 count), Larceny Over $250 from Person +60/Disabled (1 count), Filing an Application for a License to Carry Containing False Information (1 count), Obtaining a Signature by False Pretenses with Intent to Defraud (1 count), Misleading a Police Investigation (1 count), and Stealing by Confining or Putting in Fear (1 count).

According to the Attorney General’s office, Tran will be arraigned in Worcester Superior Court at a later date.