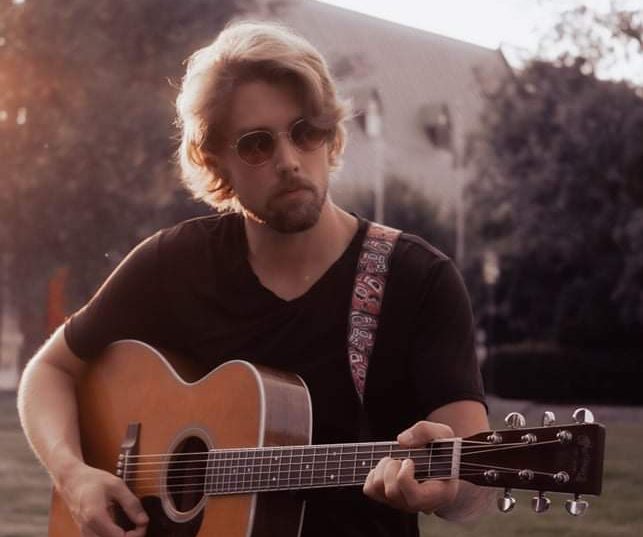 FITCHBURG — Once a “fat boy who played the trumpet,” today, Jared Moore is a handsome guitarist who’s blowing up the Central Mass music scene.

Moore, who is the son of local guitar legend Heidi-Jo Hanson, formerly of the popular female rock duo, Moonstruck, has been making the rounds for about a year, playing local haunts that include the “brew yard” at Wachusett Brewing Company, the 110 Grill in Leominster, and the Red Apple Farm in Phillipston.

After graduating from Montachusett Regional Vocational Technical School, Moore played in the local hard rock bands Young Other and Fathom Farewell (which are still around today). Now, Moore’s playing cover songs as a self-titled acoustic act and he’s in the process of writing up some originals.

In the interview that follows, I ask Moore about his life trajectory, his first kiss, his influences and future plans:

Q: So, I saw your 10-year challenge photos on Facebook. Wow! You were quite an ugly

duckling. There’s quite a transformation from your 13-year-old self with a few extra pounds and a buzzcut to your present tall, thin, dapper demeanor. Tell me about your formative years and how this transformation came to pass?

A: Yeah, I was a fat boy. I’ll tell you, me 10 years ago, that kid was a weirdo, I’ll you what. I found myself to be the kind of teenager who was just trying to figure himself out and figure out how to be social and didn’t really know how to make too many friends. I think everything started to change back in sophomore year of high school when I started to – I don’t know – something changed, I became more mature, but it was around the time that I had really picked up the bass guitar that I began to go out and play shows and meet all kinds of people and not just those at school. That really made me think about my demeanor, the way that I talk, the way that I act around people and a lot of it truly changed especially when it came to my overall likeability when I joined the musicals back in junior year because the directory Bethany Johnson, she knew that I played guitar and sang, she saw me at an open mic before and she goes, ‘we need more talent in the musicals.’ I said ‘well, I don’t know how my parents would feel about it.’ My mom, she would have been totally supportive of it, but my dad he was a little more of, ‘well, you don’t need to do that kind of stuff.’ But, once they saw the musicals and they saw me on stage, and saw what I was doing, they just knew, ‘yes, he’s a performer’ and a lot of the kids at school realized the talents I had adapted to and I was a lot more likeable at that point… I also forgot to mention, that fat boy 10 years ago, he also played the trumpet.

Q: Tell me about your first kiss.

A: Names disclosed! Oh, I was playing in that little band that I was in when I was 15 or 16 years old and we had played this show at the high school’s battle of the bands and I had a friend who played drums in another band and after she said ‘oh, hey, would you like to come over to this little fundraiser at my high school that’s going on after this?’ I think it was a track thing, I think you just ran a mile and you put a donation in. So, I said, ‘yeah of course’ and I was like ‘mom, can you pick my up later tonight it is going to be much later than expected’ and she was like, ‘yeah, of course honey.’ Again, I was about 15 at the time, so I didn’t have a license or anything like that. So, I go over to this place and by the end of the night my friend she said, ‘oh, I need a ride home, can I get one?’ I said ‘of course’ and then I was like ‘mom, can you come pick me up in Ashby?’ She says, ‘yeah, of course honey.” She picks the two of us up over at McDonald’s and we were already having a fun night and I don’t know, we just kind of started “macking” it in the back seat while my mom was in the front seat, just being totally quiet about the whole thing. I can’t believe I am even sharing this, but we get to her house, we drop her off, and we pull out of the driveway and [my mom’s] like ‘nice to meet you!’ and as we are pulling out of the driveway she pulls over on the side of the street and she starts bawling her eyes out and she gets out of the car, she opens the back seat and she goes, ‘honey, you just had your first kiss!’

Q: Would you date a musician?

A: I feel like I have always been drawn to other musicians. I have only dated a few times since high school. I really only started dating right after I graduated high school. Everyone I dated was at least a singer or knew how to play an instrument. So, I think that for me it’s very important, if I were to be in a relationship, to be with somebody who understands a bit of the musician’s life, the music industry, the sociability of what comes along with it and how to talk to people because I believe that jealousy is a very big part of some relationships – at least in my experience – and when I am in, I am all in and I just want it to be known that it’s just part of the business. It’s not like I’m out dating people on the side, it’s just that you have to talk to the people who appreciate your art afterwards and sometimes it’s good, nice and casual and sometimes there’s a lot of other ulterior motives.

Q: If you could open up for any musical act, who would it be?

A: Alice In Chains, right there, boom! Alice In Chains has got to be my biggest influence because I grew up listening to all kinds of music, but the decade that really stuck out to me the most is the 90s. When I was in that band when I was a teenager, one of my best friends, Dale Belliveau, he’s actually the lead singer of Young Other, he’s the one who turned me on to this kind of music and amongst them was Alice In Chains. I know all of their music front to back. I just really appreciate the way it was written. There is something about the harmonies, the dissonance within the chord choice and just the chemistry between all of those guys is superb.

Q: For those who aren’t from Massachusetts Jared is the son of a local guitar legend in Central Massachusetts, Heidi-Jo Hanson. She’s known for once being in the popular female rock duo Moonstruck and I’ve seen you both perform together at Terrapinfest in Gardner this summer, and we know how parents can sometimes be so tell me, what’s the most embarrassing thing your mother has ever done to you?

A: Oh, let me pull out the list, hold on. First and foremost, it was all out of support, as a good mother would…My mom, she is on Facebook, but she is not using it all too often, but I think the funniest and most embarrassing thing she will do for me is she’ll check my Facebook every now and again and she will absolutely blast every single post that I have had in the last how ever long it has been since she had seen me and she will share everything and she’ll put on comments, hearts and emojis and stuff. It’s a lot of praise and stuff. I greatly appreciate her doing that, but I am like ‘oh my gosh, she is being a mom right now!’

Q: Why did you decide to follow in your mother’s footsteps and not your father’s, what does he do anyway?

A: He’s not a musician. He bought a few basses when they were married just to kind of try to learn a little bit of music, but he never really picked it up. Instead, he is an artist in the craft of carpentry. He is the absolute man when it comes to house and barn restoration…I suppose why I never went down that path is because he told me, ‘Don’t do work with your hands if you want to make a good living, use your brain, go to college, get an education and think for a living. Don’t work hard.’ And that’s probably one of the most important pieces of advice I had gotten from him. I am very glad that I have a degree in graphic design because it is exactly that. I am used for my creative outlook and, of course, if it wasn’t for his blood including my mom’s, I don’t think I would be half as creative as I would be without them. But, to choose my mother’s footstep in music, it’s a normal part of my life. For a longtime she was the single mother of two kids and the reason she did music so much was it was a passion and it helped pay the bills. Not many people know this, but one night of gigging, which is typically three hours, is about a day’s worth of work.

Q: What are your plans for the upcoming year, working on any originals or are you still just doing covers?

A: As of right now I am picking back up on the acoustic gigs. The last few months have been a bit slower because it is that time of the year. The whole COVID thing has been rising up again and people want to stay safe, they don’t go out as much, so entertainment is not as much needed at these times, but I am thankful that I have just booked about a gig a month with quite a few locations until the end of the year and I hope to continue to fill up my calendar with more dates. My goal is about six to eight gigs a month, that would be very ideal and with everything that I am making from all of this work, I am putting it straight back into some original music. Whether it be singles, an EP, or a full-length album, I am just going to be sitting on a really good chunk of songs and I want to start making the Jared Moore name starting either late this year or early next year because it takes a lot of time to put the production into a song and you have to think about the music videos and things like that.