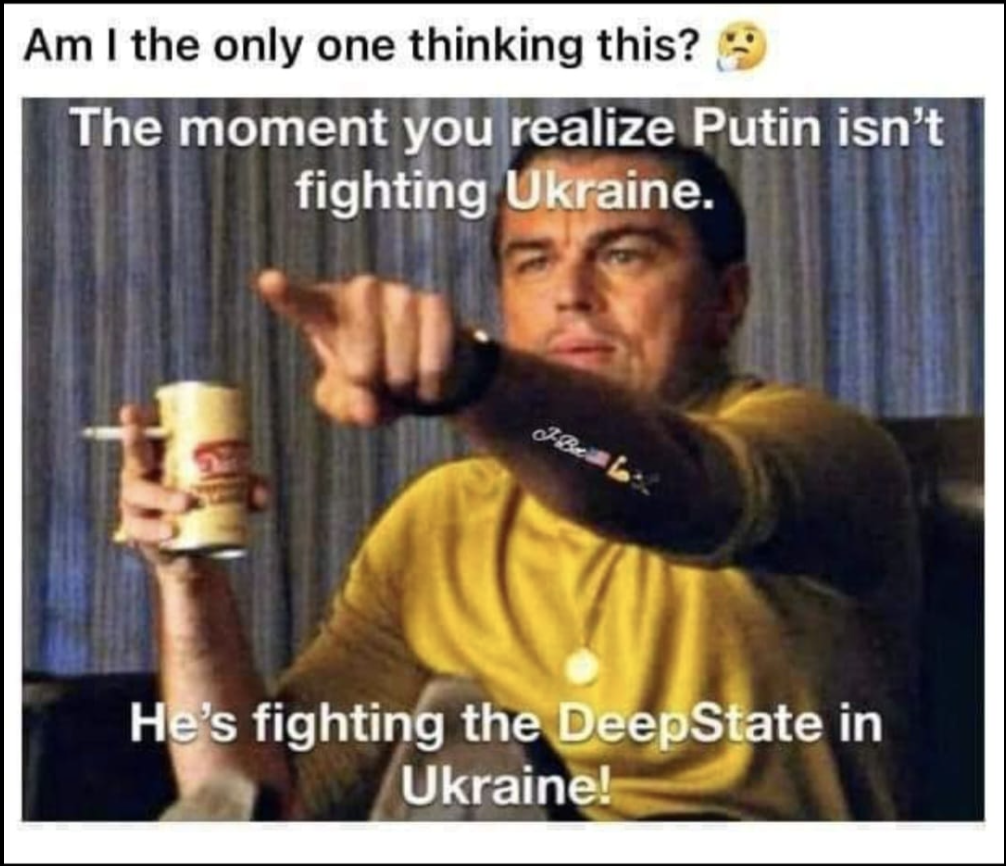 The “excessively cynical and also credulous" far-right gobbles up Kremlin-backed propaganda, twisting it into a conspiracy theory that no facts can debunk.

Hold onto your seats because this is a good one…

The far-right has embraced a real doozie of a conspiracy theory. This one posits that Russia invaded the Ukraine to prevent Anthony Fauci from creating a pathogen comparable to the coronavirus in the country’s bioweapon-manufacturing labs.

Fox News then picked it up.

According to Salon.com, on March 9, Fox News hosts Tucker Carlson and Sean Hannity offered the bioweapons conspiracy theory as a “counterbalance to the supposed pro-Ukrainian bias of the mainstream media.”

As it turns out, this latest conspiracy theory was originally spun by a Kremlin-backed disinformation campaign. According to MediaMatters.org, during a March 8 hearing of the Senate Foreign Relations Committee, Sen. Marco Rubio (R-FL) confirmed the existence of the Russian propaganda campaign, saying it was designed to justify Putin’s invasion by blaming the Ukraine for a potential future release of bioweapons. In response, Under Secretary of State for Political Affairs Victoria Nuland said “it is classic Russian technique to blame on the other guy what they’re planning to do themselves.”

So, why does the far-right embrace conspiracy theories as outrageous as the one outlined above or the perhaps more asinine theory spun by QAnon, that the Democratic Party joined forces with Hollywood and other elites to run a child sex trafficking ring, where members – including Hillary Clinton and Ellen DeGeneres – rape and cannibalize children?

In a March 18 newletter to The Atlantic titled, “What the Russia Invasion Teaches Us About the Right,” author David French argues that those on the far-right are absolutist contrarian reactionaries who lack critical thinking skills and therefore are vulnerable to conspiracy theories.

French wrote, “The contrarian commits a double error—he’s both excessively cynical and excessively credulous. He’s too quick to disbelieve one side and too quick to believe the opposite. For example, he’ll reject an avalanche of evidence of the safety and effectiveness of a vaccine while jumping quickly on fad treatments, like hydroxychloroquine or ivermectin. He’ll reject overwhelming proof that the January 6 insurrection was a Trumpist attack on the Capitol and respond immediately to speculation that the FBI or antifa instigated the riot.”

I contend that the “excessively cynical and credulous” nature of the far-right stems from, not only contrarianism, but also a combination of religious faith and regressed adolescent rebellion.

As we all know, the far-right is jam packed with Christians.

Anyone who’s stupid enough to believe there’s a God when the horrors and inequities of the world indicate anything but, is likely to be easily duped into believing long-debunked conspiracy theories as well.

In addition, many of those on the far-right manifest a regressed adolescent rebellion that takes the form of anti-establishment contrarianism (this was exemplified by the recent trucker convoy to D.C.).

Like a petulant child standing up to a strict parent, far-righters reject anything that comes out of the mainstream media or government, turning it on its head often to their own detriment. That’s why many on the right eschewed masks and vaccines during the coronavirus pandemic and continue to mistakenly believe that Trump won the last Presidential election.

This hostility towards elites is born of a working-class male “one-upism” that stems from class-based insecurity. Uneducated white males embrace conspiracy theories as “insider information” in order to feel superior to the “elites” in government as well as those of higher socioeconomic status. To these guys, conspiracy theories are fodder for arguments with feminists, reporters, their college educated friends, and now, widespread political movements born of fallacy.