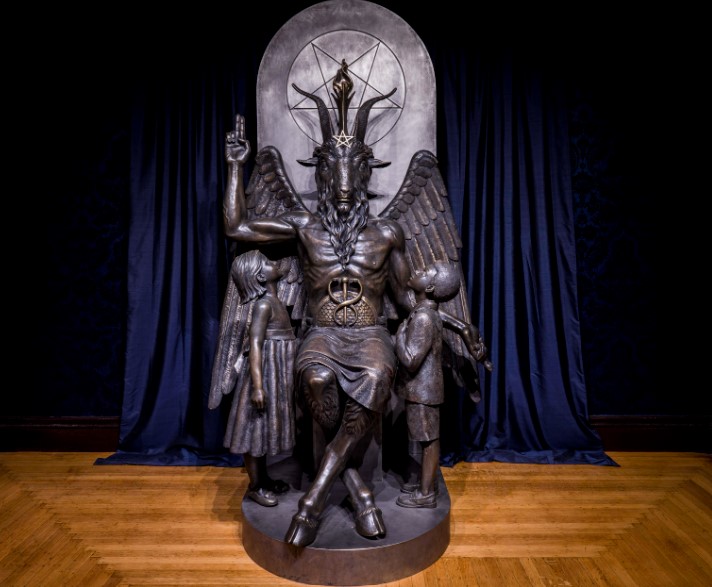 On Monday, the U.S. Supreme Court ruled unanimously that the city’s private flag flying program's denial of a Christian group's request to fly their flag was in violation of the First Amendment and therefore did not constitute government speech.

BOSTON — The Satanic Temple is requesting to fly its flag over city hall. This comes after the U.S. Supreme Court ruled Monday that it was a violation of free speech for the city to deny a conservative activist’s request to fly a Christian flag outside the building in 2017.

On May 3, the co-founder and spokesperson for the Salem-based Satanic Temple, Lucien Greaves, tweeted out an event request with Boston City Hall’s property management department to raise the Satanic flag from July 23-29 in honor of “Satanic Appreciation Week.”

In an email to the Associated Press, Greaves said that under the First Amendment, the city shouldn’t be able to arbitrarily deny the expression of certain religious practices.

“When government officials are able to impose arbitrary restrictions on claims of conscience, or to abridge the civic capacities of some based on their religious identity, we fail to be a free, democratic republic,” wrote Greaves.

In 2017, Harold Shurtleff, the director of a Christian summer camp called “Camp Constitution,” requested that the Christian flag be flown outside Boston City Hall during a demonstration on Constitution Day, which is on May 23.

Shurtleff’s request was made to Boston’s flag flying program, which permits private organizations to fly flags outside city hall for a few hours upon request. The city denied the Christian camp’s request, saying flying their flag would imply that the city’s government endorses religion.

On Monday, the U.S. Supreme Court ruled unanimously that the city’s private flag flying program did not equate to government speech, but rather represented private speech under the First Amendment. This made the city’s decision to deny Shurtleff’s request unconstitutional because it violated his right to free speech.

According to Forbes, in his opinion, Justice Stephen Breyer wrote that Boston had never denied a request to fly a flag through its program before saying, its “practice was to approve flag raisings, without exception.” He also noted there was no policy against flying certain types of flags. For instance, in the past, the city has flown the LGBTQ Pride flag outside city hall.