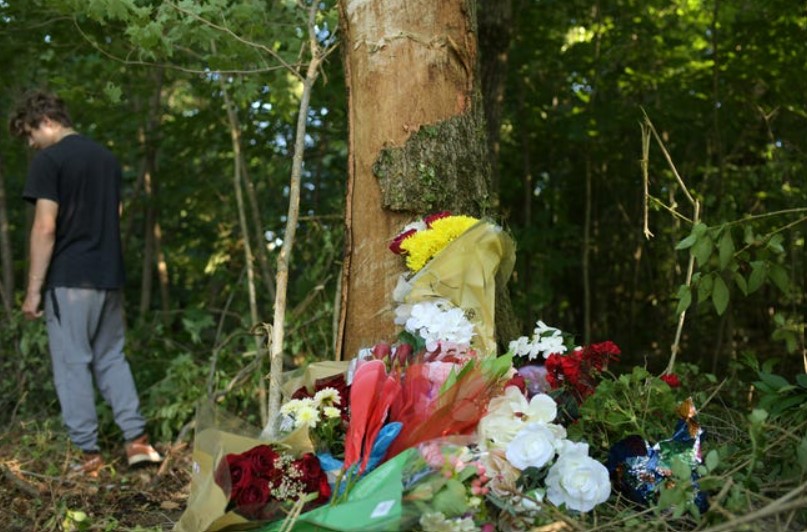 Christine Peterson/Telegram & Gazette: A memorial at the site of a fatal crash that claimed the lives of three teenagers in Brimfield early Sunday morning.

Two of the victims were students at Tantasqua Regional High School in Sturbridge.

BRIMFIELD — Police have released the names of the adult teenagers who were killed in a single car accident early Sunday morning.

According to a press release from the Massachusetts State Police (MSP), the adult victims in yesterday’s crash were Vincent J. Ardizzoni, 19, of Holland, and Shane M. Douglas, 18, of West Brookfield.

The name of the third fatality, a 17-year-old Oxford boy, was not released because he is a juvenile.

Two of the deceased teens were students at Tantasqua Regional High School in Sturbridge.

The fourth occupant, a 17-year-old Brookfield boy, survived the crash. According to a press release from the MSP, the surviving boy took himself to the hospital with serious injuries following the accident.

At about 12:50 a.m. on Sunday, May 26, State Police patrols from the Sturbridge Barracks responded to a single-vehicle crash in the area of 40 East Brimfield-Holland Road.

When they arrived on scene, police found a 2006 Nissan Sentra, which had rolled over as it went off the road. The vehicle was found approximately 40 feet into the wood line.

Three of the vehicle’s occupants were found deceased on scene.

According to the MSP, a fourth, surviving occupant wasn’t on scene when police arrived.

“The fourth occupant, a 17-year-old Brookfield boy, fled the scene prior to Troopers’ arrival. Subsequent investigation determined he went to Harrington Hospital by his own means with serious injuries,” police said.

According to the Telegram & Gazette, a memorial was made at the base of a tree the car crashed into Sunday. The memorial is composed of bouquets and broken pieces of the vehicle people found on the road following the crash.

A vigil was held for the victims Sunday night at the Hamilton Reservoir in Holland.