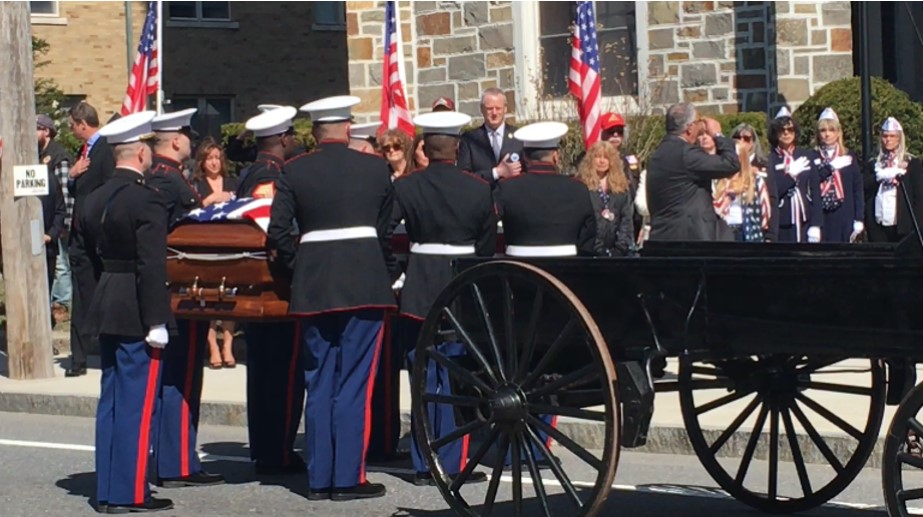 In a final farewell to a fallen hero, the public came out to attend a procession from City Hall to St. Cecilia’s Church.

LEOMINSTER — Following a procession from city hall, the flag draped casket of Marine Capt. Ross Reynolds was carried into St. Cecilia’s Church, where a funeral Mass was held in his honor.

It was the final send-off for the Leominster native, who was one of four marines killed when an Osprey aircraft crashed on March 18 in a Norwegian town in the Arctic Circle.

“He’s done a great job because he became a captain and he did his lifelong dream,” said John Condren, a Leominster resident and Navy veteran who saluted Reynolds’ casket while leaning up against a telephone pole on Mechanic Street. “Fulfilling what our dreams are is freedom and as far as I am concerned, that’s what life is all about, freedom.”

Only friends, family and officials – including Governor Charlie Baker and Leominster Mayor Dean Mazzarella – were allowed into the funeral Mass, which began at 11:00 a.m. following a half hour procession the public could attend.

Hundreds attended both the public wake held yesterday at Leominster City Hall and the candlelight vigil held on the steps of city hall the night before. Even if they didn’t know him personally, people came out to pay their respects to a young man whose life was cut short defending our freedom.

“I am just a mom of a son and a daughter, I used to be a teacher, and I’m just out here to support the family for what he did for our country,” said Lori Morin, a Leominster resident holding a small American flag outside the funeral Mass.

Following the Mass, Reynolds’ body will be laid to rest in a private burial with full military honors at the Massachusetts Memorial Veterans’ Cemetery in Winchendon.

A video version of the story is below: