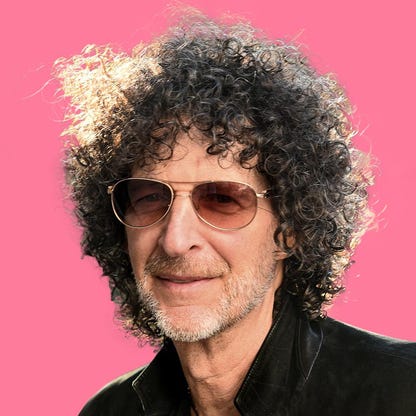 From feminist theory to the influence the mobility constraint dialectic had on Stern's rise to fame, here's a roundup of the academic literature (that's right) addressing the societal impact of the "King of All Media"

Theorists argue that shock radio evolved as a conservative backlash against Second Wave Feminism in order to contain women culturally and provide a conduit for men to redefine themselves in a post-feminist world.

The objectification of women’s bodies by shock jocks is one manifestation of this “backlash.” It was especially prevalent on The Howard Stern Show, where Stern would critique and rate the bodies of nude female guests, amongst many other things.

However, in the academic treatise: ‘‘I Think I’m Gonna Throw up: Toward a Cultural Theory of Shock Radio,” Joy Hayes and Dana Gravesen argue that Stern’s objectification of women wasn’t born of antifeminist sentiment.

Turning to film and cultural theorist Linda Williams, Hayes and Gravesen claim that Stern’s references to female anatomy were simply the radio host’s application of a crass film genre designed to elicit basal reactions from the audience as a means of engagement.

In her influential 1991 essay, ‘‘Film Bodies: Gender, Genre, and Excess,’’ Williams, who is a professor of film studies at the University of California, Berkeley, defined horror, melodrama and pornography films as “body genres.”

Often characterized as déclassé and tasteless, body genres are film genres designed to elicit bodily reactions from spectators in order to create communicative reciprocity with the audience without sincerity or intimacy.

Body genre films are marked by “excessive displays of exaggerated spectacle combined with primal infantile emotions,” that focus on the physical effect on the viewer. For example, horror movies provoke primal fear and a gross sensation, the latter of which Williams jokingly described as “on the edge of respectable.” Meanwhile, melodramas encourage excessive displays of infantile emotions by attempting to elicit tears from the audience. And pornography makes sex so “excessive” that it becomes a titillating spectacle unto itself.

Surprisingly, the majority of body-related topics covered on The Howard Stern Show are non-sexual in nature.

Hayes and Gravesen made this determination by calculating the percentages of sexual and non-sexual body part references in five four-hour-long episodes of The Howard Stern Show from 1999-2003. They also reviewed a fan blog of the show.

The five shows analyzed were:

As it turned out, about 10% more of the anatomical references on the shows studied were non-sexual in nature, however, when sexual topics did arise, they took up more airtime.

Some of the non-sexual bodily functions discussed on the shows studied were collagen implants, toe surgery and the fact that actor Andy Garcia was born with a tennis ball sized conjoined twin on his shoulder.

So, why was Stern making all those non-sexual body references on his show?

Hayes and Gravesen argue that talk radio rose to prominence during the post-industrial phase that followed the “computer revolution” of the 1960s when “rapid and large-scale technological change at the end of the 20th century raised many questions about the possibilities and limits of human bodies.”

Defined as a stage of societal development when the service sector of the economy generates more money than the manufacturing sector, the post-industrial era of the 20th century saw a rise in “computer-based infrastructure,” which resulted in the majority of the workforce working in sedentary states before a computer rather than performing physical labor.

The collective corporeal concerns brought on by an economy that devalued physical labor in favor of cubicle-and-computer-centric work environments, created a false sense of intimacy amongst radio listeners who correlated their work environment with that of the radio presenter.

This false sense of intimacy allowed for shock radio – which elicited anything but – to increase in popularity.

According to an article in the Journal of Radio & Audio Media called “Declining Shock Value: Satellite Radio and the Mainstreaming of Howard Stern,” Stern’s show was the most heavily fined and censored radio program in the history of radio.

At this time, Clear Channel Communications dropped The Howard Stern Show from six of its stations after the company was threatened with a $495,000 fine for indecent remarks made on the show.

After Stern was dropped by Clear Channel, he turned to satellite radio because he was blocked from several significant radio markets, including Atlanta.

The 12 million fans who listened to Stern’s show on K-Rock were then replaced by 3.2 million paying subscribers on Sirius radio.

Satellite radio was a good medium for Stern’s notably wild antics because the FCC doesn’t consider satellite radio a broadcast service, so shows on that medium are not subject to regulations.

When Stern made the switch to satellite radio, feminist theorist Gail Dines argued that years of Stern’s oversexualized, testosterone driven content normalized pornography and reinforced the patriarchy in the mainstream media, which was partially exemplified by the raunchy reality TV shows that became a staple of major television networks in the early 2000s.

Feminist theorists have also argued that Stern’s suggestive style, which provided the “shock” element to his show, should be considered hate speech against women, rather than simply indecent language potentially worthy of a fine by the FCC.

Other feminists believe that an increasing number of women are endorsing Stern’s brand in an attempt to reject what is considered feminine, or even feminist, in order to fit in with men and patriarchal society.

And then there are those who argue that the sexually provocative representation of women in media today in music videos, reality TV and on the internet is a post-feminist representation of women’s freedom of choice that arose out of the second wave feminist movement of the 1960s and 70s, when women fought for abortion rights and greater access to birth control.