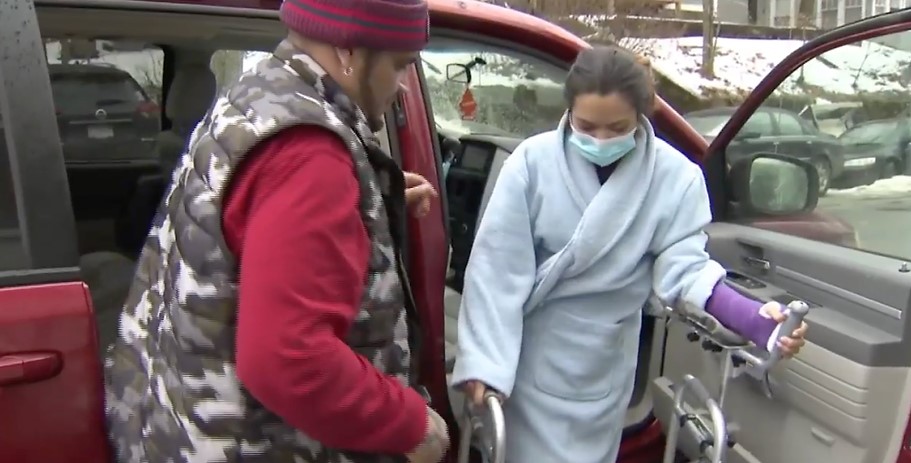 Courtesy photo/whdh.com: Samantha Dayao's stepfather, Jose Gonzalez, helps her out of the car after she was released from the hospital.

The victim’s stepfather says he feels “let down” by the justice system, after the man who hit his stepdaughter was released on $1,000 bail.

FITCHBURG — Samantha Dayao’s life was forever changed when she was struck by a car while walking home from work last winter.

On Jan. 17 at 8:40 p.m., Dayao, 22, was hit by the vehicle driven by Alvin Gaston, 43, who was captured on security camera footage standing over her body screaming before leaving her in a snowbank.

Dayao sustained debilitating injuries in the crash. Today, the mother of a 6-year-old boy walks with a cane and speaks a little slower than she used to.

there’s a lot that has gone beyond that,” said Dayao’s stepfather Jose Gonzalez.

Gonzales said that Dayao required reconstructive surgery after breaking over 20 bones in her face from the crash. Gonzalez said her mouth was wired shut, her nose broken and her skull was fractured. He added that the leg Gaston’s vehicle first struck “has a steel plate as a knee cap now” and her arms were broken as well.

Six weeks ago, when spinal fluid leaked into her brain, Dayao underwent emergency brain surgery which Gonzalez said caused her to have a miscarriage.

So far, Gonzalez said Dayao’s medical bills are costing the family well over $100,000.

Yet, on Monday, $1,000 was all Gaston had to pay in bail following his arraignment at Fitchburg District Court, where he pled not guilty.

“Originally, it was $2,500 bail and then the public defender said ‘oh, he only has a thousand dollars with him today so can he be released on 1,000 bail?’” said Gonzalez.

When asked how he felt about the judge’s decision to release Gaston on $1,000 bail, Gonzales said:

“Let down by our justice system as usual, unfortunately, because there is no reason why he was able to get out and say not guilty, knowing what he did.”

As for what kind of punishment he should have received, Gonzales said, “I think until the trial at least he should have been put away.” Later adding, “Who knows if he is driving at night and this happens to someone else. He should have at least been put away until all of this is done and really feel bad for his actions[…]He has a lengthy criminal record and what makes it worse is that he is just getting away with another crime.”

According to staterecords.org, Gaston, 43, who lived in Ayer at the time of the accident, is now living in an apartment on 2nd Avenue in New York.

Staterecords.org reports that in 2010, Gaston was arrested in Arizona for Manufacturing, Delivering, or Possessing with Intent to Manufacture or Deliver Controlled Substances Schedule I,II <28gms. Schedule I or II drugs are defined as narcotic drugs or methamphetamine. (News Link Live is waiting for the results of a public records request of the court documents for this case from the Fitchburg District Court).

“I would like for him to drive and not do this to someone else. So, taking his license away would be a fair situation. I still think that he should serve some time for just leaving the scene. I mean, how could you just leave?” said Gonzalez.

Later adding, “At the end of the day, it’s really just the justice system that’s failing us.”

If you would like to help Dayao pay her medical bills go to this GoFundMe page.