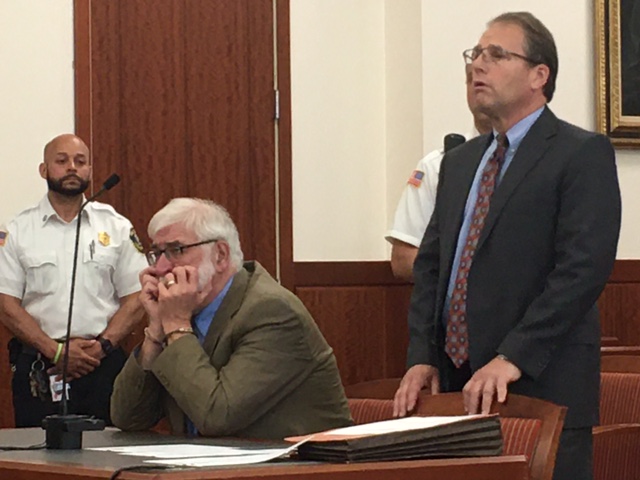 Staff Photo/Genevieve DiNatale: Stephen Jaszek (left) grips his face as his attorney, Kenneth Anderson (right), speaks during his sentencing in Worcester Superior Court on May 20.

During sentencing, the Assistant District Attorney said the defendant continually exploited the vulnerabilities of an 11-year-old girl by using a position of trust and an institution that upholds it, as a platform of predation.

WORCESTER — The former Auburn elementary school music teacher who was found guilty of raping one of his fifth-grade students is going to spend his golden years surrounded by rods of steel.

Stephen Jaszek, 66, of South Hadley, was sentenced to 18 to 20 years in prison today by Judge William Ritter in Worcester Superior Court.

Jaszek’s attorney, Kenneth Anderson, was ostensibly defeated during the sentencing.

When I asked him for a statement, he shook his head saying he really didn’t have anything to say about the matter. But he did…

In his closing statements, Anderson reiterated Jaszek’s innocence saying over the course of his 35-year career, only one woman came forward with rape allegations. Throughout the trial, Anderson questioned the victim’s credibility because of known mental health issues that include continued self-harm that preceded the alleged sexual abuse, obsessive-compulsive disorder, as well as “derealization” and “flashbacks,” two disorders that make it hard for her to parse out what’s real and what’s not.

Anderson then asked Ritter to “set aside the court’s verdict of guilty,” which Ritter promptly denied.

Anderson carried on, adding that Jaszek was a real “family man,” happily married with an 18-year-old biological son who was graduating from high school in the coming weeks.

Anderson then asked for a sentence of 10 years and a day, citing Jasek’s age.

Anderon’s motion hardly phased Ritter, who replied, “I think the sentencing guidelines are too low due to the violent and intrusive conduct acknowledged and the victim’s coming forward talking about medical issues.”

The victim’s mother then made a statement.

“My daughter decided not to speak for herself today,” she said. “The defense wants you to believe she was a disturbed child prior to the abuse. She was not disturbed. She was happy and respected authority and that is why it wasn’t easy for her to say no.”

She then threw a wrench of hearsay into the proceedings, by reading a poetic statement from a new alleged victim, whom she pointed out was seated with her family in the courtroom.

The victim’s mother then added that while she held Jaszek culpable, she didn’t blame his family for his behavior.

“My daughter struggles to make connections with people because of this abuse. I hope he will stay in jail for the rest of his life,” she said.

The prosecutor in the case, Assistant District Attorney Matthew Corey, initially suggested a 30-year sentence to Ritter. Corey came to this conclusion by grouping all five charges into three separate acts, and assigning the mandatory minimum sentence of 10 years to each.

Corey noted that since the incidents were not concurrent, Jasek had time to modify his behavior, but instead, he made the conscious decision to continually exploit the vulnerabilities of an 11-year-old girl by using a position of trust and an institution that upholds it, as a platform of predation.

However, Ritter gave a less severe sentence than the one Corey suggested.

In addition to jailtime, Jasek is required to register as a sex offender.