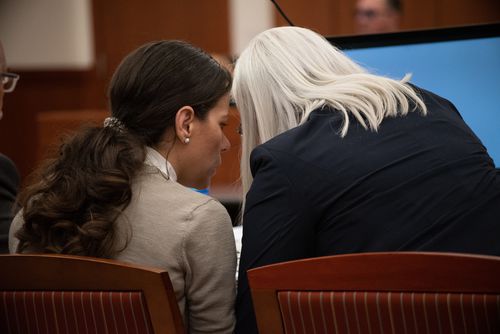 According to messages presented in court Monday, the woman sent explicit pictures of herself performing sex acts on one of her fiancés to the other out of jealousy.

WORCESTER — Prosecutors say a woman who fatally stabbed her fiancé eight years ago was engaged to another man at the same time and both of her fiancés were aware of each other.

According to the Telegram & Gazette, Stephanie Fernandes, 39, would switch her engagement ring depending on which fiancé she was with. This information was presented by prosecutors in the second week of Fernandes’ trial in Worcester Superior Court, which began Monday.

Fernandes is alleged to have fatally stabbed her fiancé Andrew Wagner in the throat on May 7, 2014. This took place in their Worcester townhouse located at 25 Angelo Street.

Prosecutors argue Fernandes was the aggressor in the relationship and deliberately stabbed Wagner, while the defense claims Fernandes was acting in self-defense.

This week, prosecutors presented evidence of Fernandes’ alleged infidelity as well as numerous death threats both Fernandes and Wagner sent to each other throughout the course of their relationship.

Prosecutors allege that tensions arose between the two in 2013, when Fernandes was engaged to Michael Laramee at the same time that she was engaged to Wagner.

According to the Telegram & Gazette, text messages were read verbatim into the record Monday by Worcester Police Officer Joseph Essex. One of the messages presented to the jury was a photograph of Fernandes performing a sex act on Laramee, which she sent to Wagner. She allegedly sent this explicit image because she was upset over someone Wagner was supposedly dating.

Other text messages presented Monday indicated that days and years prior to Wagner’s death, both Fernandes and Wagner sent death threats to one another.

“I’m going to (expletive) kill you,” is a text Wagner sent Fernandes on May 4, 2014, three days before he was fatally stabbed once in the throat by Fernandes.

A year earlier, in 2013, Fernandes allegedly sent texts to Wagner which said, “kill yourself please” and “I want you dead.” According to the Telegram & Gazette, the latter text was sent two months after the prior.

Amidst these threatening text messages were loving/sexual exchanges, where Fernandes and Wagner discussed their “plans to become intimate” and have a child, according to the Telegram & Gazette.

According to court documents, in the six months leading up to the stabbing, Fernandes had two miscarriages. Her messages detailed the depression that resulted from them.

In addition, three days before the murder, on May 4, 2014, Fernandes texted Wagner as he was heading to work, upset that he hadn’t called her.

She told Wagner she was going to go out as retaliation because Wagner didn’t like it when she drank alcohol. In response, Wagner texted that he was “going to (expletive) kill you.”

Fernandes didn’t respond to the death threat, informing Wagner that she was going to be turning off her phone for the night.

That day, Fernandes also texted Wagner to say that she wanted to end their relationship, adding that the only reason she got back with him was because she was pregnant at the time and now that she wasn’t pregnant with his child, she didn’t want to stay.

In addition to the aforementioned text exchanges, on Monday, prosecutors presented dozens of photographs of Fernandes from 2010 to 2013 in which she appeared to have no injuries, according to the Telegram & Gazette.

Also introduced were photographs of an alleged stab wound on Wagner’s arm, prosecutors say was inflicted by Fernandes in August 2013.

News Link Live will have more on this story as the trial progresses throughout the week.