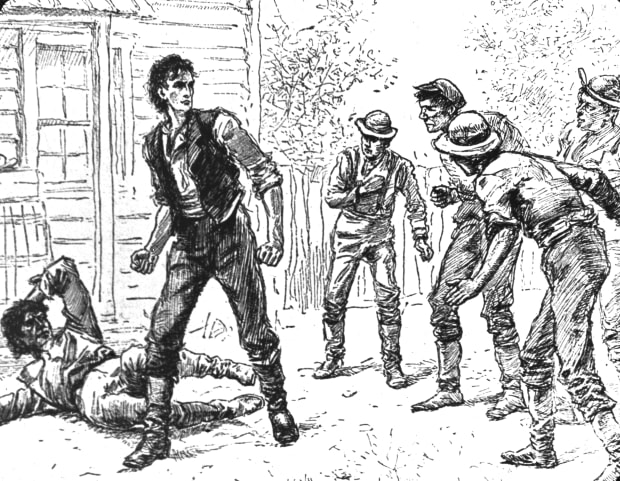 Courtesy Photo/Getty Images: An early 20th-century illustration of a young Abraham Lincoln (standing left) squaring off in a wrestling match against a member of the Clary's Grove Boys, a gang in New Salem, Illinois.

According to several historians, Lincoln only had one recorded loss in his 12-year wrestling career.

Long before Abraham Lincoln issued the Emancipation Proclamation – freeing the slaves within the Confederacy in 1963 – the United States’ 16th president was a nearly undefeated wrestler. He wrestled for 12 years, winning 299 of 300 recorded matches.

According to Howard Graham of Blackbelt.com, even though Lincoln was thin and lanky, weighing 180 pounds at 6’4” tall, his manual labor as a farmer in the backwoods of Kentucky as well as his experience as a rail splitter helped “forge a naturally strong specimen of a man who stood head and shoulders over anyone who dared to challenge him in the sport.”

In 1830, when he was 21-years-old, Lincoln – who was then a resident of New Salem, Illinois – was the wrestling champion of Pike County. A year later, while working as a store clerk, the Clary’s Grove Gang, a group of rough and tumble youths, came to the store and egged Lincoln into a match with their leader, Jack Armstrong, by openly bragging that Armstrong was a better wrestler than the county champion.

Lincoln agreed to wrestle Armstrong and – as legend has it – the whole town looked on as Lincoln decisively won the match, throwing Armstrong to the ground, knocking him out cold.

Despite the outcome, Armstrong and Lincoln became fast friends after the bout, bonded by a love of wrestling. It’s said that Lincoln defended Armstrong in a court case a few years later.

Akin to modern freestyle wrestling, “catch-as-catch-can” wrestlers started off standing apart from one another with the goal of eventually pinning the opponent’s shoulders to the ground. If no fall was scored, wrestlers grappled on the ground, using virtually any hold or technique imaginable (full nelsons were not out of the picture back in the day).

Lincoln’s only recorded loss came at the hands of Pvt. Lorenzo Dow Thompson, the wrestling champion of St. Claire County with whom Lincoln crossed paths with while a volunteer in the Illinois Militia during the Black Hawk War.

Lincoln sized Thompson up and him to a match. Thompson tossed Lincoln out of the ring, ultimately winning the match against the future president.

Despite this minor setback, Lincoln was inducted into the National Wrestling Hall of Fame in 1992 as an “outstanding American” in the sport.