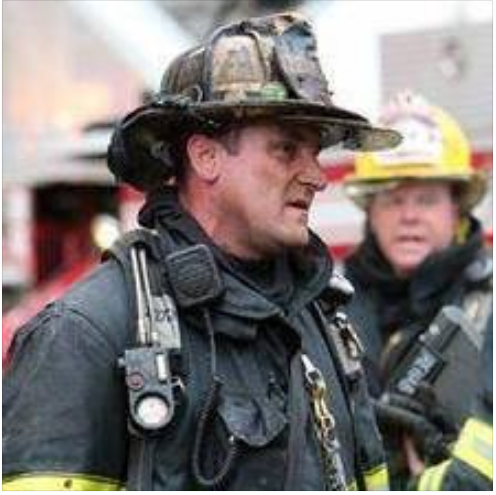 WORCESTER — Topping the list of women not to be reckoned with is Diane Cotter. The proud wife of a longtime Worcester firefighter, Diane led a quiet life until her husband was diagnosed with prostate cancer in 2014.

“I had such a private life and I loved it,” said Diane. “I liked no one really knowing me. I had a circle of about five friends, I had no more than 99 Facebook friends but when we were blown into this catastrophe, everything changed.”

Diane found her husband’s diagnosis dubious. Paul was diagnosed with prostate cancer even though he had no family history among his male relatives. And it wasn’t just Paul, countless other firefighters in their circle were dying – not in a blaze of glory – but from the pernicious effects of cancer.

Determined to find an answer, late one night Diane pulled her husband’s uniform trousers from his “bunker gear” box in the cellar. Using a flashlight, she observed several dime-sized holes near the groin of the work pants once worn by the love of her life, who stole her heart with a smile from his Cadillac during a “chance encounter” at a stoplight on Mill Street in 1977.

Wondering if the holes had anything to do with her husband’s condition, Diane took to the Internet. That’s where she got confirmation that the lining of firefighter gear might cause cancer. She then began reaching out.

She emailed Erin Brokovich, a former law clerk who became famous for building a successful case against Pacific Gas & Electric Company, which had been contaminating the water of Hinkley, California, for decades.

Diane was shocked when Brokovich actually got back to her.

“After hearing from Erin Brockovich and after contacting many of our manufacturers of turnout gear, I couldn’t get a straight answer. They would respond by saying things like ‘oh, everything meets EPA standards,” said Diane, who added that the companies would not tell her the chemicals in the gear stating that it was “company proprietary information.”

She then reached out to the science community, which eventually led her to Dr. Graham Peaslee, an expert on PFAS who works as a concurrent professor of chemistry and biochemistry at Notre Dame.

Peaslee responded to Diane’s query asking her to send samples of her husband’s work gear, which she did. After testing the samples, Peasley confirmed Diane’s suspicions.

“Peasley got back to me, saying ‘you may have to do another study, Diane, because I had to measure PFAS in volume and I never had to do that before,’” explained Diane. “That floored me and that’s when I really knew we had to get more help in this.”

By 2017, three years after her husband’s diagnosis, Diane had gotten the word out through social media and an article she had written for a trade publication. When Jason Burns, a firefighter in Fall River who was the president of Local 1314 caught wind of Diane’s research, he reached out to the International Association of Fire Fighters (IAFF) to see what they knew.

The IAFF responded saying they contacted the main fire fighter gear manufacturers, among them, DuPont, LION, and Gore-Tex Crosstech and the companies responded saying there was no issue with their gear. LION even released a report commissioned by Exponent, Inc., saying their gear was safe. Exponent, Inc. is known for helping major corporations during “turbulent times.” For instance, Exponent has supported the tobacco industry, at one time releasing a report stating that second hand cigarette smoke doesn’t cause lung cancer.

“We then began to see that there was a very deep connection between the likes of LION gear and the IAFF,” said Diane.

Diane discovered that the IAFF was beholden to the aforementioned manufacturers because they had been advertising in the union’s magazine, the IAFF Firefighter. They even sponsored the IAFF’s annual symposium on firefighter cancer.

After the IAFF’s refusal to come forward, Diane took to Twitter in 2018, frequently criticizing Harold Schaitberger, IAFF’s president. According to an article in Men’s Health, a local union legislative agent responded in-kind, criticizing Diane and Peaslee on Twitter. This followed with a complete ousting of Diane from the firefighter union community. Diane’s former union friends said they weren’t supposed to speak to her anymore.

Nevertheless, despite these roadblocks, countless firefighters and organizations have reached out to her on social media and through her website https://www.yourturnoutgearandpfoa.com/.

“Oh, my stars! We have come so far because we have a network of firefighters that are so incredibly educated on this now,” said Diane.

Among those that reached out to her were representatives from the San Francisco Firefighters Cancer Prevention Foundation, the FDNY, and firefighters from the Fall River and Nantucket departments, specifically Jason Burns, the former president of Fall River Firefighters Local 1314 and Sean Mitchell, the secretary-treasurer of Fire Fighters Local 2509 in Nantucket.

According to Diane, Burns and Mitchell then crafted Resolution 28 – Toxic Chemicals In PPE, which was accepted in December 2020 at the IAFF 55th Convention. Resolution 28 calls for the IAFF to no longer accept sponsorships from the chemical industry and/or personal protective equipment manufacturers who add PFAS to their gear.

And with that, one women’s love-motivated persistence changed an entire industry for the better.