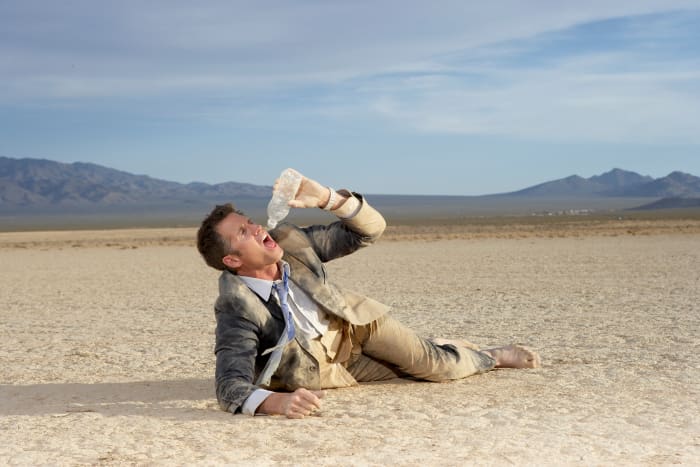 Courtesy/Imgflip.com: The thirst is real.

Due to the subtlety of their tactics, these guys are a little harder to pinpoint than the stereotypical catfish, married man, or young man looking to experiment.

Any woman who’s ventured into the cesspool of social psychology known as online dating has bumped into a few obvious stereotypes. There’s the catfish, the married man trying to cheat on his wife, the young guy looking to experiment with older women, and the romance scammer.

But that’s not all!

Here are five new types of guys trashing up online dating sites that you’ve probably encountered, but haven’t been able to pinpoint because of the subtleties of their tactics.

1. The “I’ve Never Done That Before” Guy

The “I’ve Never Done That Before Guy” is a special breed of pathological liar unique to online dating sites. He’s the guy you’ve seen on Tinder for the last eight months who’s first message is “I’m new to this, so please be easy on me.” This type of guy uses two ploys to trap women into one-time sexual encounters.

One, he forces the assumption that you have been online dating longer than he has, so therefore you have had more hookups on the sites and experience hooking up, so there’s no excuse for you not to give it up immediately. Two, he uses the “I don’t know anything about the site” excuse to disappear for weeks on end and return with a reply of “I don’t know how to turn on the notifications for this app so I didn’t hear from you, let’s exchange numbers prematurely” excuse or the “how do we have a video chat in the app, I’ve never done that before” excuse to hide the fact that he’s catfishing. Sometimes this guy will pretend to agree to a video chat before exchanging numbers or meeting in person, then say that his phone couldn’t handle the function once it comes time to actually have that video chat.

We all know men have little to no standards when it comes to short-term sexual acquisitions. But the thirsty responder is the exception to the rule even amongst this crew of parched Neanderthals.

Virtually every woman who’s used an online dating site has encountered the thirsty responder. Why? Because he swipes right on every woman.

The thirst is so pure and true for these guys, they’ll play the numbers game on Tinder until anyone responds, and when someone does, they’ll keep the conversation going regardless of its content.

(A good way to test for a guy like this is to replace good with “goo” and eventually respond to his questions with non-sequiturs. If he keeps talking regardless, he’s a thirsty responder).

The thirsty responder is the guy who answers every prying question designed to sus out men dating for sex, and once he discloses his intent to have a hookup (either directly or indirectly) and his match declines, he’ll keep texting and texting and texting into the void until he’s blocked.

Unphased by rejection and overly persistent, the thirsty responder tends to be low on the socioeconomic totem pole. Since most of the women the thirsty responder pursues dismiss him with irreverence, he acts any which way to the woman who foolishly replies to his online mating calls. Why? Because he interprets any interaction as niceness and then falsely concludes that niceness equates to stupidity. Since the thirsty responder thinks his potential match is stupid because she’s as easy to access as he is, he lets it all hang out, acting any which way because he’s really a power-hungry Machiavellian who – though he doesn’t benefit from the system – buys into it. (Don’t you love stupid people who project their stupidity onto others incorrectly?)

The Never Serious Guy is always joking around because he isn’t looking for anything serious (although he says he is) and if you dare respond in kind, he’ll report you.

The Never Serious Guy is perhaps one of the most annoying guys you’ll encounter while dating online. Everything he says is either a premature attempt at an inside joke based on the little information you tell him or a quote from a B-rate movie you’ve most likely seen but forgotten for its lack of relevance. For instance, he’ll say he’s a big Will Ferrell fan and Blades of Glory is his favorite movie (although it isn’t). And his way of asking you out to sushi is “would you like to get some dead fish with me tonight?” If guys like these would save their dad jokes for fatherhood rather than dating, they might actually have the opportunity to use them in the proper context; but perhaps The Never Serious Guy’s tawdry humor is a welcome form of natural selection.

Secretly a misogynist with no respect for women, The Never Serious Guy expects you to take him seriously even though he never says anything of substance or personally revealing. In addition, The Never Serious Guy mistakenly assumes that he’s a real catch and all the women dating online are desperate and will therefore take a man regardless of the way he treats her.

So, in between his Jim Carrey references and half-baked dad jokes, he’ll be asking deeply prying questions such as “where exactly do you work,” “why didn’t your last relationship work out” and/or “what are your dreams and aspirations.”

Other indications of The Never Serious Guy’s misogyny are a lack of concern for whether you’re offended by the racist jokes he texts off indiscriminately, and/or the fact that his lack of gravitas indicates that he’s seeking something casual, although his profile indicates otherwise.

If you do as I do and give equally stupid responses to stupid questions, he’ll get his boxers in a knot and ask you what the problem is or perhaps even stop talking to you altogether. If you call him out on his bullshit, he’ll most likely block and report you to the app.

Coined by renown relationship advice expert, Deborrah Cooper, the “Hobosexual” is a man on the dating scene who is perpetually unemployed, with no intention of ever pursuing a career and/or otherwise improving his financial situation. Looking for a place to stay as well as free sex, the Hobosexual takes to online dating sites in search of a woman who can provide both.

A spoiled child turned entitled misogynist, the Hobosexual will ask questions like, “what do you bring to the table?” On the second or third date, he’ll ask if he can move into your apartment and/or use your car.

One of the archetypes of the Hobosexual is a phony, fat hippie with a man bun. This phony hippie Hobosexual is 300 pounds, on food stamps, and completely opposed to the establishment. A complete hypocrite, the Hobosexual seeks out standardly attractive women who “sold out to the man” by working full-time office jobs.

Since he feels superior to women, the Hobosexual believes that despite the fact that he’s grossly overweight, broke, and/or uneducated, he’s doing any woman a favor by being in her presence. He also overestimates his attractiveness and believes he’s an 8, when he’s really a 2.

The Hobosexual is on the make and – if you date one – you are the corporation he refuses to work for. He’ll try to trap you with a baby in order to keep you around just long enough to find someone higher up on the socioeconomic totem pole, at which point, he’ll drop you like a bad habit.

Any woman who’s ever been online dating has been perplexed by the ever elusive “Hi Guy.” This is the guy who goes out of his way to reach out to you just to say “hi.”

If you dare respond to his lazy outreach, he’ll reply to you with equally short answers or nothing at all. But why? Well, there are two reasons: one, he was never really interested in you at all but because he’s a typical predatory male without sexual standards for a fling, he made the first move and expects you to carry the conversation directly into your bedroom. If the “hi guy” determines that you are not easy, he’ll take the high road and ghost. The second reason the “hi guy” reaches out and doesn’t reply once you do, is because (unbeknownst to him) he was looking for an ego boost. Once he gets the validation of your response, he confirms that he still “has it” and moves on (most likely to his already extant wife or girlfriend).