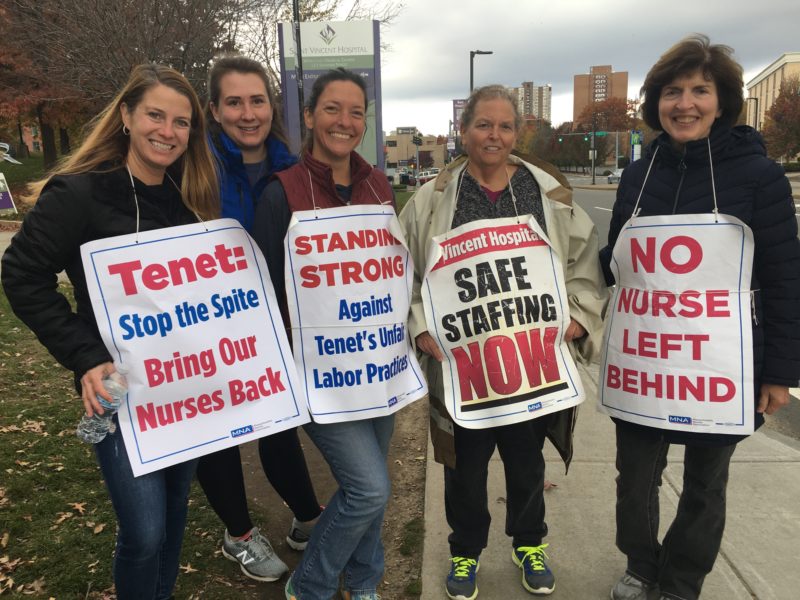 The Massachusetts Nurses Association filed a complaint against the hospital, where the recent shift change has forced a number of nurses to leave for other positions.

WORCESTER — The union representing nurses at Saint Vincent Hospital has filed a complaint against Tenet Healthcare with the National Labor Relations Board for “unilaterally imposing” a 12-hour work shift on nurses working in the hospital’s emergency department and inpatient units.

This comes about three and a half months after nurses in the MNA voted to ratify their new contract with the hospital, putting an end to a 301-day strike, one of the longest nurses’ strikes in the country’s history. Representatives of the MNA say that this work shift change was in violation of a provision of their latest contract with the hospital, which guaranteed the nurses on strike to return to their same position and shifts. The shift change, from five eight-hour shifts a week to three 12-hour shifts, went into effect on May 1 and impacted about 250 nurses.

“Tenet is pursuing a policy that for affected nurses will mean a significant change in their hours and shifts despite the fact that the agreement that ended the strike guaranteed every nurse the right to their same position, hours and shift they held prior to the strike. There are also many nurses for whom 12–hour shifts are not feasible,” said David Schildmeier, the MNA’s director of public communications.

Schildmeier said that about 50-70 nurses whose shifts were extended at the beginning of the month were severely impacted by the change, forcing a number of them to relocate to other hospitals with more accommodating schedules. Schildmeier said that the MNA is not opposed to 12-hour shifts, but Tenet Healthcare failed to “reasonably negotiate” prior to the implementation of the shift change.

“We are not opposed to 12-hour shifts and many nurses find them valuable, but many nurses absolutely don’t and can’t accommodate them,” said Schildmeier. “In any other case, and we represent nurses in 70% of the state’s acute care hospitals, there’s a long process, reasonable negotiation to make it. They’ve just gone ahead and done it and the only thing that you can conjecture from the way they have done it, is that it is punitive.”

Schildmeier said that Tenet Healthcare met once with the union, where MNA representatives presented documented concerns from impacted nurses. He said that some nurses were concerned the new schedule would be bad for their health, while others were worried the 12-hour shift would impede their ability to care for their children and families. Meanwhile, other nurses felt the shift change was retaliation for the strike, adding that no consideration was given to seniority in making the decision, which was also in violation of the union’s collective bargaining agreement with Tenet Healthcare, a for-profit healthcare company based in Texas.

“They negotiated one time we presented that data and information,” he said. “They said initially that they would meet with us again the following week and then they reneged on that commitment and just went along and moved ahead, which is why we followed the injunction.”

In a statement, Saint Vincent’s spokesperson Matthew Clyburn said the hospital’s collective bargaining agreement with the MNA gives the hospital “the right” to move nurses to 12-hour shifts with 30 days’ notice. And while Schildmeier said the shift change is costing the hospital nurses, the hospital sings another tune.

“Our decision to transition to twelve-hour shifts is to enable the hospital to attract and retain as many nurses as possible,” Clyburn wrote in the release. “An overwhelming majority of applicants and current employees strongly prefer three 12-hour shifts per week over five 8-hour shifts per week. Additionally, 12-hour shifts have become common for nurses working in local hospitals such as UMass Memorial Medical Center, and many other hospitals across the Commonwealth of Massachusetts and the United States.”

The hospital added that the MNA “refused to cooperate” with them by not indicated which nurses were adversely affected by the shift change, adding that the union “provided an incomplete list of potential conflicts” before firing off their press release.

“Although we are not obligated to negotiate with the MNA on this issue, we offered to meet and confer. We also provided them with far more notice than the collective bargaining agreement requires. We asked the MNA to identify any nurse with concerns about this change, but the MNA stalled and refused to cooperate. Finally, they provided an incomplete list of potential conflicts just hours before distributing their press release attacking the hospital,” said Clyburn.

Schildmeier said that the charges with the National Labor Relations Board are pending. If they are upheld, Tenet will have to reverse its decision.