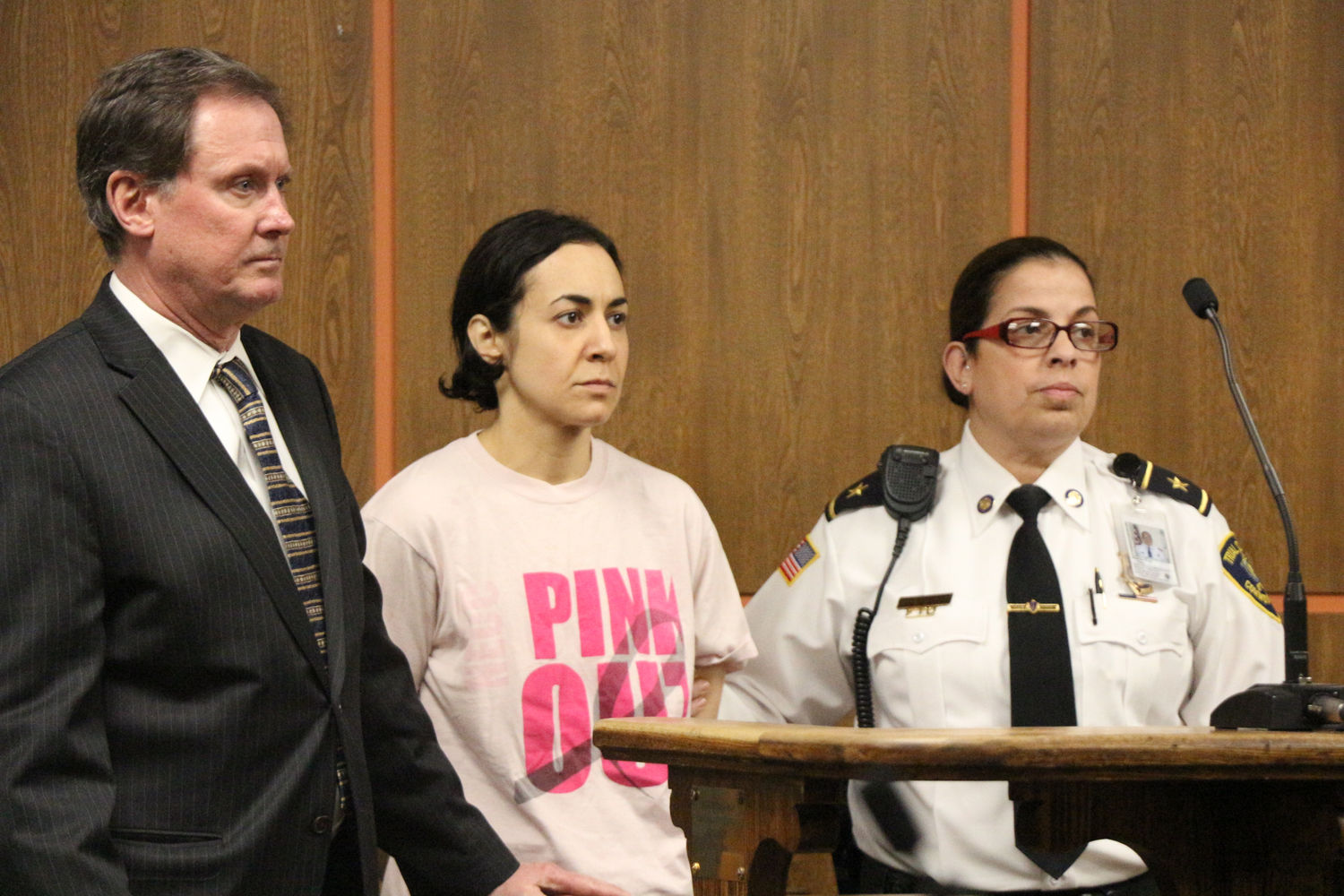 Courtesy Photo/MassLive.com: Shana Pedroso in Fitchburg District Court with her attorney, Michael Hussey, during her arraignment.

The woman, who physically abused her children for years, wrote detailed accounts of the beatings in a journal obtained by police.

WORCESTER — A Fitchburg woman who habitually beat her children until she killed her six-year-old daughter was sentenced to life in prison.

Judge Daniel Wrenn of Worcester Superior Court issued the sentence today after the woman, Shana Pedroso, plead guilty. According to the Worcester District Attorney’s Office, Pedroso, 41, is eligible for parole in 25 years.

On April 10, 2018, Fitchburg Police responded to 139 Stoneybrook Road in Fitchburg where they found six-year-old Sofia Brito deceased on the floor and her 9-year-old brother badly beaten. Sofia’s death was ruled a homicide by blunt force. Pedroso’s husband, Marvin Brito, 42, made the call to police, saying his daughter wasn’t breathing.

Pedroso was the sadistic matron of her household. According to the Telegram & Gazette, a prosecutor in the case said that Pedroso routinely beat her children until they were uniformly purple and relegated her husband to the basement, requiring him to ask permission to come upstairs, use the bathroom or shower.

The Daily Mail detailed that Pedroso once used superglue to close a wound on her son’s neck and banned him from calling 911.

The day she murdered her daughter, police found Pedroso hiding in the woods with several thousand dollars and a journal that detailed the beatings.

According to the Telegram & Gazette, the day before she killed her daughter, Pedroso described in her journal how she “beat the (expletive) out of the kids” until they were “bedridden.” In addition to the journal, Pedroso had thousands of notes with similar statements throughout her residence.

In December 2021, Brito plead guilty to charges of manslaughter, permitting substantial injury to a child and reckless endangerment of a child in connection with the killing of his 6-year-old daughter and the injuries suffered by his 9-year-old son. According to the Worcester District Attorney’s Office, he was sentenced to serve 8 years to 8 years and a day on the manslaughter charge and a concurrent two-and-a-half-year sentence on the reckless endangerment of a child charge.

Back in 2018, Brito, who worked as a foreman at a concrete company, told investigators that he largely left the child rearing up to Pedroso, only spanking the children “when necessary.” He did however, admit to hearing his wife repeatedly abuse his children without intervening. Brito said that since he worked all day and remained in the basement throughout the night, he was unaware of the extent of damage Pedroso was doing to their children, whom she had with her all day because she homeschooled them.

According to The Telegram & Gazette, when Brito plead guilty, his attorney Jaclyn Greenhalgh told Judge William Ritter he was pleading guilty “to accept responsibility for his failure to act.”