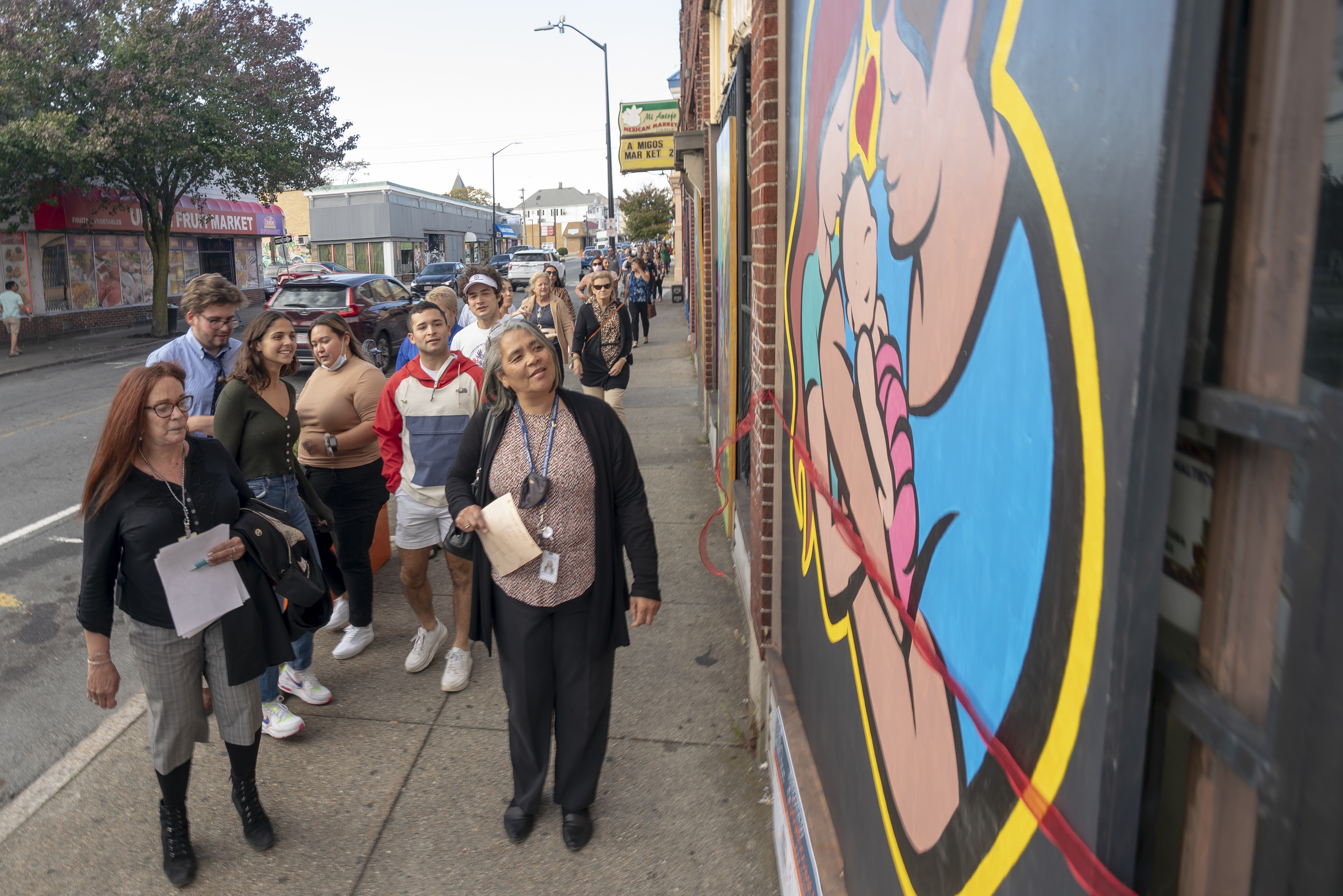 Courtesy Photo/MassDevelopment: Onlookers peer at artist Eden Soares’ mural at Capital Theater in Arlington in 2021. This mural was funded by an “Art is Everywhere” grant from TDI Creative Cities.

The grant is part of MassDevelopment’s two-year Transformative Development Initiative (TDI) Creative Cities program, which launched in New Bedford about two years ago.

FITCHBURG — Fitchburg is one of three Gateway Cities selected for a $1.6 million-dollar state grant to support art and cultural partnerships throughout the municipality.

The other two cities selected for the grant are Lynn and Springfield. All three municipalities are going to receive the $1,605,000 “investment,” although MassDevelopment did not disclose what percent of the $1.6 million Fitchburg would receive in the organization’s April 26 press release announcing the award.

“MassDevelopment’s goal through TDI Creative Cities is to ensure Gateway Cities remain vibrant places to live, work, and visit by empowering and fostering connections between the cultural institutions, arts organizations, and creative entrepreneurs that call these communities home,” said MassDevelopment’s President and CEO Dan Rivera. “Following a successful two-year pilot in New Bedford, where TDI Creative Cities supported the city’s vision of becoming a destination for arts and culture, we’re excited to expand this intensive arts-focused initiative into Fitchburg, Lynn, and Springfield.”

Fitchburg’s TDI Creative Cities program is going to be spearheaded by ReImagine North of Main, a government and public service organization dedicated to revitalizing downtown Fitchburg run by Richard Lapidus, the president of Fitchburg State University. Fifteen other organizations including the Fitchburg Art Museum, the Community Foundation of North Central Massachusetts, and the North Central Massachusetts Chamber of Commerce are partnered on the project as well.

According to MassDevelopment, the grant money will leverage capacity and resident participation in local art and cultural activity.

“The positive impact of MassDevelopment’s Transformative Development Initiative can be felt in Gateway Cities across the Commonwealth, and its focus on arts and culture as an economic driver helps these communities build on the attributes that make them unique and harness the power of place to create economic opportunities locally,” said Housing and Economic Development Secretary Mike Kennealy, who serves as chair of MassDevelopment’s Board of Directors.

The Creative Cities program was founded in 2019. It’s funded by a $4.4 million award from the Barr Foundation, a nonprofit organization in Boston.

Gateway Cities, like Fitchburg and Leominster, are defined by Massachusetts law as small to midsized cities in the Commonwealth with populations between 35,000 and 250,000. Although Gateway Cities anchor regional economies around the state, their population is largely below the state’s average household income and educational attainment rates.