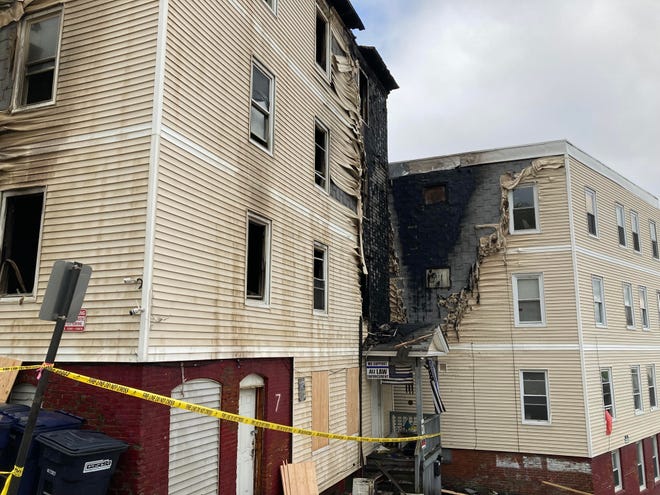 Displaced tenants seek temporary housing and try to make do with $515 the Red Cross gave to those who lost access to their living situations this weekend.

WORCESTER — Following an escort from the Worcester Fire Department, tenants of 5 Eastern Avenue returned to their respective apartments to retrieve their belongings Sunday.

5 Eastern Avenue and 5 Gage Street, which both abut 2 Gage Street, were damaged in the deadly fire that tore through the four-story apartment building Saturday, claiming the lives of two and injuring three other residents.

According to the Worcester Police Department, the fire at 2 Gage Street began at 3:31 a.m. Saturday morning and continued throughout the day. Fire officials were still putting out hot spots in the building at 4 p.m.

Jim Li, the owner of both 5 Eastern Avenue and 2 Gage Street cleared trash with a stick on the sidewalk Sunday morning as police and fire officials returned to the scene to continue their investigation into the blaze, which overtook his properties.

“My heart goes to the people who were injured and to their family,” Li told the Telegram & Gazette. Later adding, “I feel saddened and heartbroken.”

Li added that neither 2 Gage Street nor 5 Eastern Avenue were insured because all the insurance companies he contacted said the buildings were too close together to qualify for coverage.

The extent of the damage to 2 Gage Street and the abutting buildings is still unknown. The ongoing investigation has made it impossible for Tom Natoli, a resident of 2 Gage Street who was working in Westborough at the time of the fire, to know the extent of damage the blaze had on his belongings. Natoli, who was one of 21 people that resided in the building prior to the fire, is staying with friends until he figures out whether he can return to his Gage Street apartment or not.

Meanwhile, Steven Feliciano, a tenant a 5 Eastern Avenue said he and his two other roommates (one of which is undergoing dialysis) had to evacuate suddenly leaving everything, including their wallets, credit cards and attire, behind.

tenants, he said the money did “absolutely nothing” to cover food and shelter. It cost him over $200 to simply replace his clothing.

As of 3:00 p.m. Sunday afternoon, Worcester police say there is no new information to report on the fire.