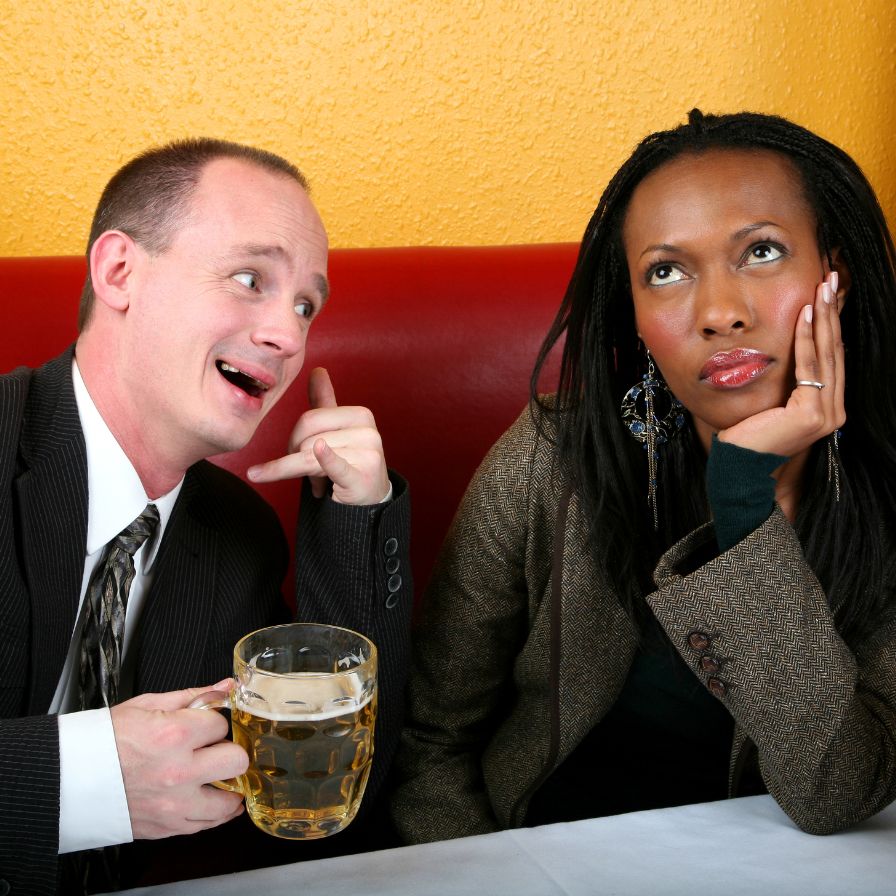 From men who need an ego boost, to entitled lazy daters and Madonna-Whore misogynists, this article provides an in-depth analysis of the cesspool known as modern online dating.

And just when you thought it was over, here are five more types of men you’ll encounter while online dating:

1. The Guy Who Didn’t Know He Needed an Ego Boost

There’s nothing more perplexing than a guy who reaches out to you on a dating site only to ghost if you respond. As it turns out, these guys are the male equivalent of a middle-aged woman who hits the town all dolled-up to see if she’s still “got it.” The vast array of profiles on dating sites give men the evolutionary satisfaction they seek: a wide variety of women at their fingertips who can present themselves as options with little-to-no-investment. So, some men (whose rosters are drying up perhaps?) take your response as an indication of availability and “forget” to follow up, because they’re simply palliating their ego with the illusion of options. This is also true of an ex who texts every once in a while, just to say “hello,” and if you respond, he vanishes. These ego gratifying online bros just want to know that you are receptive. It gives them an ego boost, and they most likely have no idea that’s what’s driving their behavior.

“The Entitled Lazy Dater” is a standard breed of misogynist who’s a 3, but expects to date 10s. Since he can’t actualize this situation in real life, he hits up women who are way out of his league – both physically and socioeconomically – on every free dating site. He’s the troll faced, beady-eyed pig who sends a thinly veiled sexual innuendo to every hot 20-year-old on Tinder. He’s also the gross looking dude without a high school degree, who hits up a beautiful Harvard professor, asking her what her favorite mystery novel is; if she takes him up on his offer, he’ll call her stupid in two weeks. This behavior can be explained away by both evolutionary biology and the patriarchy. From the Darwinian lens, men overperceive their sexual attractiveness because it allows them to approach women much more attractive than they are. If they hit on women out of their league consistently enough, these unjustifiably confident men may luck out and impregnate a high value woman with their low value sperm. Meanwhile, from the perspective of the patriarchy, men of low socioeconomic status feel entitled to women because of the perceived superiority derived from their gender. Since these men don’t view women as “fully human,” even if she’s a 10 with three PhDs, she’s still a woman, simply an object designed for a man’s pleasure with the biological function of making babies. These men believe women love freely, but must work to seek a man’s validating love.

Though Freud is known for his sexist theories (i.e., penis envy), he did nail down some bizarro sexual issues exemplified by an unfortunate segment of the straight male population. According to an article by The Latch, when Freud was practicing psychiatry in the early 20th Century, he noticed a psychological dichotomy in some of his male patients that he dubbed the ‘Madonna-Whore complex.’ Guys with this complex view women as either virginal, good girls worthy of love and respect, or prostitutes to be defiled with sex, never both.

Freud said of this complex, “Where such men love, they have no desire and where they desire, they cannot love.”

Men with a Madonna-Whore Complex fail to see women as complex sexual beings capable of being both motherly and sexual simultaneously. Ingrained within these misogynists are age-old perceptions of sex originating from monotheistic religions, which initially were designed to keep men from raping every woman, child and goat in the village.

Naturally, guys like these view all women on dating sites as whores because they are putting themselves out there, talking to and perhaps even hooking up with, multiple men. Madonna-Whore types on dating apps will ask any woman straight away just to come over, with no accommodations made or questions asked. It’s simply assumed that since you’re dating, you’re fair game for free sex even if your profile indicates you are looking for something serious. Don’t be surprised if these guys proposition you on the first date; whether you comply or not, you’ll never hear from them again.

4. The Guy with Mismatching Proportions

Not everyone hits the genetic lottery, that’s why online dating sites are replete with men whose eyes are too close together and ears too far apart. Then there are those even odder anomalies of people who look objectively attractive, but somehow the pieces don’t fit. They’re arms are a bit too short, their body square, they almost have it all together, but not enough to attract the opposite sex even when their abs are on full display in a poolside pic.

When I was a kid, I thought that child prodigies and other brainiacs would eventually be a smash hit on the dating scene because of their intellectual superiority. As it turns out, that’s not the case. Rather, online dating apps are replete with former child prodigies in tenured faculty positions at Ivy League colleges who just can’t get a date. Whether he advanced string theory at the age of 14, or is working on his PhD at Yale and looks just like a male Adonis, physicists, mathematicians, and high-end academic researchers are not spreading their seed. I guess women, like men, find dumb people hot and evolutionary theory can’t explain everything.